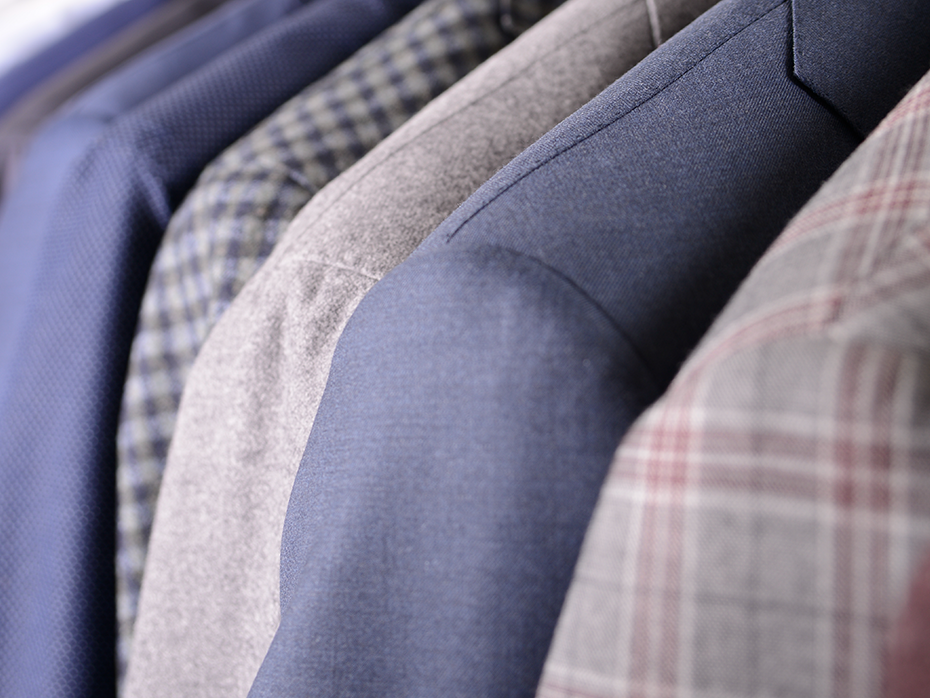 Classic jacket, sport coat, blazer, suit jacket. Men’s jackets have many names, however, the differences between them aren’t always clear-cut. A lot of our customers perceive suit jackets and blazers as being one and the same, except they call “suit jacket” the one they wear in a suit, and “blazer” a jacket they wear with mismatched trousers. Is that really so?

Contemporary tailoring is many-sided, and menswear is less and less clear-cut. However, these two must-have garments still differ from one another.

Each sartorial detail, such as the shoulders or the inside finish of the jacket, defines the style and level of formality. That’s why, in order to always pick the correct look for any occasion, it’s good to be able to tell the difference between a suit jacket and a blazer.

The origin of the jacket

Male outerwear has changed over the centuries. It wasn’t until the end of the XIV century that the term jaquette was first used. A jaquette was longer than a jacket., it could reach down to the knees, and it was embroidered, padded, lined in fur.

The first to resemble the modern jacket was probably the Sakko, or sports coat. Of common use in England in the XIX century, sports coats were straight, wide-shouldered, long enough to reach the hips. They were stitched at the sides, had just one set of buttons, and two cut pockets. The fabric was squared or striped, and they were worn with matching trousers.

The origin of the blazer

It’s hard to say when exactly the man’s blazer first appeared. The term was first used around 1825 to define the red blazers used by the members of the Lady Margaret Boat Club, the rowing Club at St. John’s College in Cambridge. Their jackets were called blazer (from the word “blaze”) because of the bright red fabric used to tailor them, but the term was thereafter used for jackets in any colour.

What is a jacket?

A man’s suit jacket is an outerwear belonging to a whole look composed of: jacket, trousers, and sometimes a vest (you can read here our guide about the men’s vest). Although it has recently become common to wear it with something different such as jeans, chinos, elegant trousers in a different colour, the suit jacket is supposed to be worn with matching trousers, so as to keep a formal look.

What is a blazer?

Unlike the jacket, a blazer has its own identity: it was created to be worn with mismatched trousers. There are several kinds of blazers, however the best-known is the so-called Navy Blazer: a double-breasted, blue blazer, with six golden buttons, and flap pockets. The single-breasted blazer comes from the club blazer. It is usually blue, and has patch pockets. Fashion has changed the nature of this garment, and today blazers can be found in ever new shapes and colours

There are different styles, both for suit jackets and blazers. However, suit jackets have a formal purpose; blazers are more casual.

Suit jackets are normally single-breasted with two or three buttons, or double-breasted with six or four buttons. More formal models have welt pockets whereas less formal jackets have flap pockets.

“A rollino”, “a camicia”, “Neapolitan”, “Italian”, “English”… There are several different techniques to tailor jackets’ shoulders, and they vary according to brand, nation, tailor. It is quite hard to find a universal agreement on the different techniques used for jackets and blazers, because they often share the same structure.

Italian suit jackets’ shoulders are typically “a rollino”. They’re hand-made, slowly and accurately. A very thin padding is first inserted, followed by another padding (called “rollino”) where the sleeve is attached to the body of the jacket. Thanks to this technique, the shoulder is given its typical rounded look, and the whole shape of the jacket is well-defined and structured.

Unlike the suit jacket, a blazer is often tailored with shirt-shoulders (“a camicia”), so called because the same technique as for shirts is employed: the extra fabric is pushed under the shoulder. The garment will have a softer look, following the natural shape of the shoulders.

As for the shoulders, it’s difficult to find agreement on the differences between the inside of a suit jacket and of a blazer. That said, there are however small, acknowledged differences in the modern tailoring.

Softness and tightness are provided by the interfacing technique: the traditional lightweight hair canvas extends from the roll line and shoulders to the bust, so that the jacket will keep its smooth line. The interior lining and the stitching of the lapels are the telling details for a high-quality men’s coat. Moreover, a jacket must have a snugger fit than a blazer. Jackets, after all, aren’t worn over much except a shirt

Blazers are less formal than suit jackets. A blazer must not be as poised as the suit jacket, therefore it’s typically unlined, unpadded, the lapels aren’t edge-stitched. The blazer is very light, comfortable to wear over multiple clothes.

The fabric for a suit jacket is something the trousers will be cut out of as well. This means it must be sturdy, tear and abrasion-resistant because trousers can tear or wear out more easily than a jacket. Besides this practical aspect, there’s a stylish one to be considered: a suit jacket is a formal coat, so colour, pattern, and details must be suitable for a business context as well as for a ceremony.

The fabric for a blazer, on the contrary, can be chosen regardless to the trousers, so it can very well be less sturdy, lighter, in different patterns and with different details.

Considerations about the style

When do you wear…

The suit jacket is the most formal of men’s outwear. Thanks to the poised and structured outline, the jacket is the perfect garment in almost all formal occasions. On your every-day business meetings, it will be worn with tone on tone trousers; according to the recent tendencies, in less formal contexts it can be worn with trousers in a contrasting colour.

A blazer is a wildcard, it can be worn both in casual contexts and in casual business meetings. It’s less formal than a classical suit jacket, and the perfect companion for your weekend activities, because it has a casual elegance that’s inappropriate on formal business occasions.

How to match them

As already mentioned, the suit jacket is supposed to be worn in a suit. So you’ll have to consider first of all the trousers, and then possibly the vest. Both must be in the same fabric as the jacket. This is a slim fit garment: underneath you must wear a shirt and nothing else. In winter it is possible to add a sweater, but it must be thin and light.

Green light to creativity? More or less. This is a casual garment in your wardrobe, so you can play and match chinos in a contrasting colour, and wear a shirt or a t-shirt according to the occasion. A blazer is a must-have for a mismatched, casual look.

What is a sport coat?

Three is the magic number. There is a third kind of jacket to consider: the so-called sport jacket. This belongs less and less to the gentleman’s wardrobe, though.

The sport coat was first used at the end of the nineteenth century, when a mismatched look on hunting trips was in fashion. The jacket was called Norfolk, it was made of tweed, had three or four buttons, had a belt, and bellows pockets. In the 1920s, these tweed jackets lost the belt and the folds. Men started wearing them not only on their hunting trips, but also in their free time instead of a suit.

Over time the sport coat became a hybrid: half suit, half sportswear. Italian tailors make a finer and more elegant version of it, whereas English tailors keep their product more similar to the original sport coat.

A sport coat is made of not-so-formal fabrics, such as: tweed with a herringbone or pied-de-poule pattern; cheviot; covert; Bedford Cord. Blazers and sport coats are very similar: a blue, single-breasted blazer without golden buttons looks virtually the same as a simple blue sports jacket.

Although these jackets share many characteristics, they maintain subtle differences, and they’re enough to be able to tell them apart. One of them isn’t better than any other: it all comes down to the occasion.

Each jacket has its unique edge, that will allow you to look at your best according to your surrounding environment.