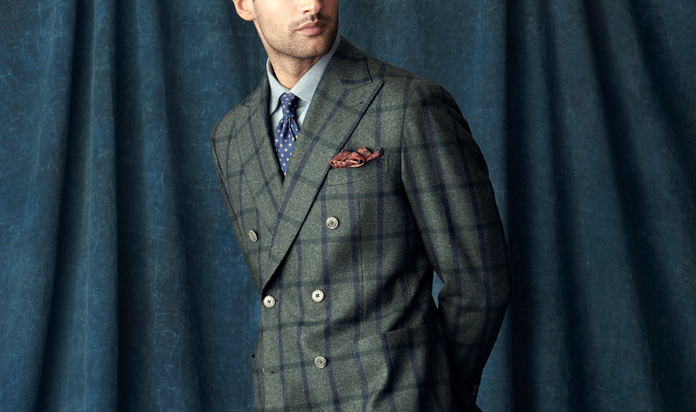 After being a prerogative of tailors and a selected circle of customers for a long time, now the modern double-breasted suit has come back. However, forget about those stiff and strict pieces that could be found in the closet of any gentleman in the past decades.

The all-time men’s formal wear has been simplified, slimmed down, and shortened, and has now made a stylish comeback as a favourite on the metropolitan streets of the world.

What is a double-breasted suit?

The original double-breasted jacket had six buttons, only three of which could be fastened. It was inspired by the XVIII century’s reefer jackets worn by the military. To accommodate shorter men, a four-button version was created.

The favourite model of the last century is the so-called “Kent” – named after the Duke of Kent who created it: a four-button double-breasted jacket, where lapels are rolled and only the bottom button is fastened. Prince Edward, the Duke of Windsor, made it famous

A charming and subversive look, tailored with casual care and never ostentatious; the lapels extend to the waistline, bringing out the shoulders and creating the illusion of height.

Double-breasted suits have been popular from the mid-1930s up to mid-century and later they’ve come back in the mid-1980s and have stayed in vogue until mid-1990s. They were boxy and square, the jacket was extra long, and the lapels were really wide.

Thanks to modern icons of style, such as the movie star Eddie Redmayne, the famed David Backham, and Sir David Bowie, the double-breasted suit has made a huge comeback, looking cooler and more relevant than ever.

Fashion is constantly evolving, and fashion shows follow one another all the time: spring/summer, pre-fall, fall/winter, besides an ever-growing number of “capsule collections”. Change is a daily occurrence, and most of men’s staple clothing items – such as the iconic double-breasted suit – have changed over time.

The modern Italian double-breasted suit looks sharper and slimmer in comparison with older versions. The jacket is cut close and is shorter, which provides a more modern and slender look thanks to the different ratio between the width of the chest and the length of the torso.

Here is a list to help you identify the most important models of double-breasted suits.

The inside middle button must be kept fastened at all times, so that the jacket keeps its look and shape – although the tycoon Aristotele Onassis used to leave it open in order to convey a studied carelessness.

The double-breasted jacket 2×1 isn’t much used today, but it’s really appreciated by high fashion experts. It fits in less formal contexts, it’s both casual and classy.

The most traditional button stance. The double-breasted jacket 4×2 is very comfortable and it’s perfect for your free time or a not-so-formal business meeting.

Never mind the exceedingly creative models of the past few years. The 6×2 is the most eclectic double-breasted suit, perfectly appropriate for your formal business meetings. This model comes with 6 buttons, only 2 of which can be fastened, and it’s the most worn double-breasted model.

Less common and yet still very interesting for the high fashion fans is the 6×1: not quite suitable for formal occasions, it’s perfect for a refined free time.

There will always be differences depending on the brand, or the maison tailoring the suit, however, the Italian double-breasted suit has typically peak lapels. The tips of the peaked lapels are pointed up, towards the shoulders. Depending on their width, they can actually almost reach the shoulders.

Lapels are important: they give the double-breasted jacket its unmistakable look. The double stance and the peaked lapels bring out the chest and shoulders, bestowing a slender look on the wearer.

If you’re looking for a double-breasted jacket for your business wardrobe, we suggest horn buttons in the shade of your suit’s colour. However, if you wish to find the right suit for your free time, you can be creative and choose a contrasting colour, or even metal buttons – why not?

When it comes to Italian double-breasted suits there aren’t fabrics or colours that are better than others. However, some patterns are to be preferred. Pinstripe and herringbone are perfect for double-breasted suits, because they enhance the slendering effect. A macro over-check pattern and any plain colour are eclectic and suitable for various occasions.

How to wear and pair your double-breasted jacket

When it comes to properly wearing a double-breasted jacket, the same rules apply as for any other jacket: the middle button must be fastened, or the top and middle one.

Not all agree on the proper way to sit in a double-breasted jacket: some claim the jacket must be unbuttoned; others suggest that it must be kept buttoned up, in order to prevent creases.

Is the double-breasted jacket for everyone?

An Italian double-breasted suit might be too much for a first job interview. However, if it makes you feel comfortable, it is a perfect choice both for your everyday attire in the office and a special occasion such as a wedding (for the groom or the best men), a ceremony, a party.

Don’t forget that a double-breasted jacket mustn’t always be worn in a suit, it is a perfectly fashionable jacket all by itself.

How to pair a double-breasted jacket

The double-breasted jacket is to the single-breasted as pleated trousers are to plain ones: intensely more sophisticated and polished. It’s not a look for everyone, however it’s a simple way to convey savoir faire and self-confidence.

It can be worn in many ways: formal and discreet, with a shirt and tie in plain colour or simple pattern; creative and spontaneous, with shirt, accessories and even socks in vibrant colours and a strong character.

What about the trousers? Trousers have been revamped as well: they’re skinnier and shorter. Pleated and with cuffs, they’ll add a touch of vintage to your look. Plain trousers are to be preferred for a more formal and discreet look.

The choice of the shirt depends on the fabric of the jacket. In case of a double-breasted jacket, you’ll be able to pick almost any shirt: a formal, white, dobby shirt, or a casual, denim one. We have just one piece of advice: prefer a shirt with a closed collar, such as the Italian or semi-Italian: they suit the double-breasted look better.

The tie will have to be chosen depending on the fabric of your jacket, but also on the occasion. In a business context, a monochromatic pattern, tone on tone, is to be preferred.

Provided you’re the type of man who wears a pocket square, the options are endless. Just remember: the pocket square must be in a different fabric than the tie, although in the same colour.

Fashion is constantly evolving, and fashion shows follow one another all the time: spring/summer, pre-fall, fall/winter, besides an ever-growing number of “capsule collections”. Change is a daily occurrence, and most of men’s staple clothing items – such as the iconic double-breasted suit – have changed over time.

The modern Italian double-breasted suit looks sharper and slimmer (aka slim fit) in comparison with older versions. The jacket is cut close and is shorter, which provides a more modern and slender look thanks to the different ratio between chest and length of the torso.

Choose the fabric and create the perfect Italian double-breasted suit