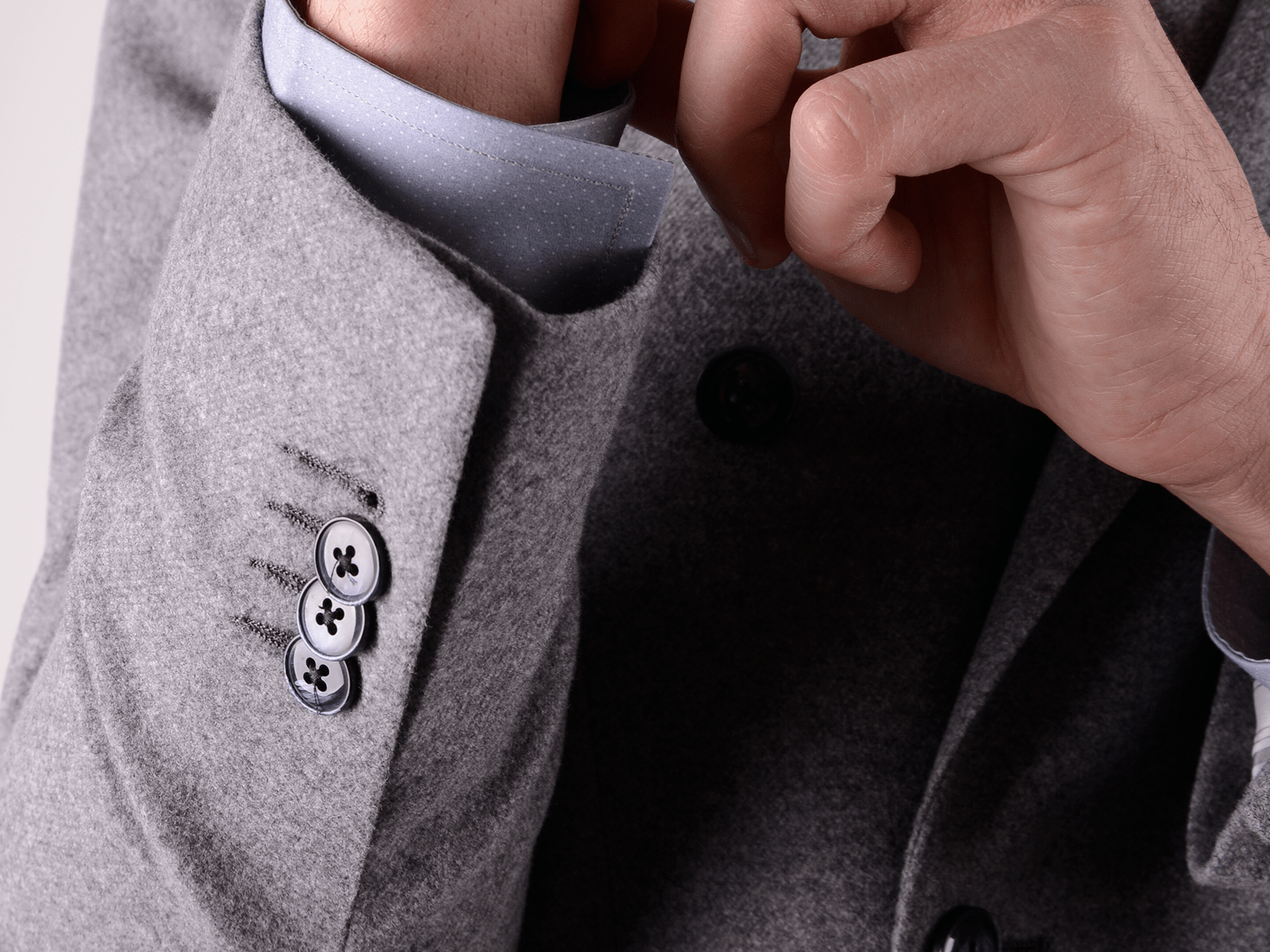 It’s universally known that working and kissing buttons (buttons on suit jacket or blazer sleeves) are indicative of a bespoke suit. That said, how many times have you asked yourself: what exactly are they for? The answer, as always, has its origin in the past.

History of buttons on suit sleeves

Tracing precisely the historical origin of the sleeves buttons is very difficult.

There are various theories that try to answer this curiosity but the most popular are generally two: military and worldly.

The theory that traces the introduction of buttons on the sleeves of the jacket back to the military environment is attributed in turn, according to different sources, to some great historical figures.

The most often credited are Queen Elizabeth I, Frederick II of Prussia, Napoleon and Admiral Nelson, who allegedly required their troops to wear jackets and uniforms with buttons on the sleeves.

In all cases the motivation behind the introduction of additional buttons would have been to prevent troops from using the sleeves to “clean themselves”, for example by wiping their nose, mouth, tears or wounds. , a habit that tended to spoil the appearance of uniforms and make troops not very presentable.

The presence of buttons would have made this practice more annoying, in some cases even painful (especially in the case of brass buttons), discouraging soldiers from using sleeves as a handkerchief and helping to enforce the decorum required of an official uniform.

According to this theory, the buttons on the sleeve were used back in the days when garments were always open on the sleeves, making the button and the buttonhole a necessary means of opening and closing.

There was a time when all men wore jackets and it was something that they wore whatever they were doing. While reading a book, climbing a mountain or simply working on their own land: the jacket has been a true essential men’s wardrobe item for nearly two hundred years.

Now, imagine a gentleman in the late XIXth century while working in his garden wearing his blazer. A bit uncomfortable look, isn’t it?

Once again tailoring adapted fashion to everyday life. Thanks to the buttons (here we are!) every gentleman could just roll up the sleeves without removing the jacket and preventing it from getting dirty.

“Right, this makes sense, but why they couldn’t just take them off?”. In this case it’s all about etiquette. At that time, in fact, taking one’s jacket off in public was akin to stripping down to your underwear.

Nowadays most off-the-rack jackets are made without working buttons. Why? Because they’re trying to fit in as many body types as possible and if the holes were actually made, it would be extremely difficult to adjust the sleeve length. Sewing the buttons on the outside making these nonfunctional allows the sleeves to be adjusted quite a bit.

But there’s something more. What determines whether or not you can have working buttons is also whether or not the jacket has sleeve plackets in the cuffs. A placket, called fessino, is the opening where the fabric overlaps which allows you to roll up your sleeves, if necessary.

One of the dilemmas while getting a custom-made jacket is the number of buttons to get on the jacket sleeve. The classic tailoring usually involves two alternatives: a sleeve with 3 buttons or with 4 buttons. The 2 buttons alternative is not widespread.

The sleeve with three buttons certainly has a more sporty and a light cut; perfect in the case of a blazer (if you want to learn more, discover our article about what are the differences between a jacket and a blazer), we suggest you choose this one for more of a casual and less formal look.

The jacket sleeve with four buttons is more suitable for a more formal look, can be worn in occasions where it is necessary to show off a more rigorous and clean look; perfect for the more traditional jackets.

Finally, if you wish, you can also decide to leave the last button on the sleeve untied, to enhance the tailored workmanship of the buttonhole, which is particularly appropriate in the case of four-button sleeves.

Blog > GUIDE > Why are there buttons on suit jacket sleeves? Here’s what they are for