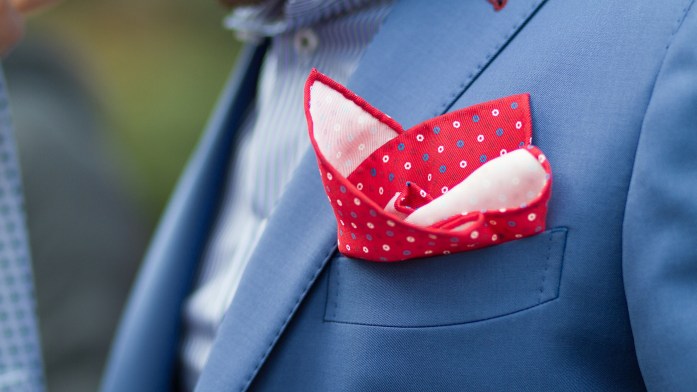 If you still think that the pocket square is nothing more than that little accessory belonging to women’s fashion, this article is for you.

Pocket square is, in fact, the term used to indicate the most common “pocket handkerchief”, one of the details of the male wardrobe that contributes to defining the style of a true gentleman.

Born as an accessory for practical use, over the years the pocket square has become an icon synonymous with masculine elegance and attention to detail.

The origins of the pocket square

According to some style experts, the handkerchief originated in ancient Egypt, when small red-coloured bandages were used by the people around the Nile as a symbol of wealth. Those small fabric scraps, although not directly comparable to the modern pocket square, are in fact considered the first example of fabric only accessory.

With the end of the Middle Ages, what became the common pocket square began to gain some success in the bourgeoisie throughout Europe, both as an ornamental stylistic element and as a more practical tool.

The French noblewomen, in fact, used to perfume it and keep it close to the face, so as to mask and endure the unpleasant smells of the time. Frequent use and increasingly constant exposure made it a true style object over time.

The materials used were among the most exotic and were carefully embroidered to demonstrate their wealth and status. The best embroideries and the most refined models of the pocket square of the XVI century were produced in Italy, and it is thought that they were imported by Caterina de Medici in France.

Thanks to the quality of the materials and of the decorations, these accessories were often handed down from generation to generation and were considered equal to jewellery.

The origin of the name

Until the reign of Louis XVI, king of France (late 1700), handkerchiefs of all shapes and sizes could be found, but history has it that Marie Antoinette, at the time wife of the king, troubled by the absence of a convention, convinced Louis XVI to decree that from that moment the pocket handkerchiefs should all be squared and with a pocket-size of 40 centimetres.

The birth of the real pocket square, as we know it, will take place not earlier than the 19th century, that is, when the 2-piece suit became the must-have of the male wardrobe.

Initially kept in trouser pockets, gentlemen began to put their handkerchief in their jacket pockets (hence the name pocket handkerchief) to avoid unhygienic contact with coins or other objects.

Often used (inappropriately) as names in common language, in the vocabulary of masculine elegance the two terms pocket square and handkerchiefs identify two types of accessories that are similar but extremely different in use.

The term pocket square (or the less common pocket handkerchiefs) is used to refer to an accessory that has an ornamental role: made with precious and refined materials, it must be carried in the pocket of the jacket or blazer and serves to characterize the look and the style of a male outfit.

The term handkerchiefs instead refers to a more functional accessory, made with less noble materials and used for practical purposes, for example by blowing the nose or wiping sweat. The handkerchief therefore does not respond to needs related to elegance or bon ton: it should not be shown in plain sight, but rather hidden inside the trouser pockets.

In this article we will therefore talk specifically about the pocket square.

Pocket square as a distinctive element, today as yesterday

The pocket square fulfills a subtle purpose: it is a small detail that should not be the centre of attention (therefore, no excessively bright colours) but at the same time be a distinct element from the whole outfit.

Have you ever wondered why most of the traditional tailored jackets are made with an external pocket?

Well, not (only) to keep sunglasses or now forgotten business cards, but to show a touch of elegance. Without any accessories inside, the pocket is structurally superfluous and the outfit appears incomplete.

Here is what you need to know to get started with this secret detail.

When to use the pocket square

Easy to wear, quick to match, the men’s pocket square adds the right personal touch to everyday outfits. Here are our suggestions on when to use it and how.

Combined with a classic blue or grey suit, or a sporty broken suit (in fresco lana), it immediately makes the men’s suit more interesting. To be on the safe side, just choose a non-shiny, cotton fabric and basic colour, white recommended.

A linear fold and voila, style is served. Note: it is important to remember that if you wear the tie, the pocket square may recall its colours and patterns, but the fabric must be different.

Strolling through the alleys, scattered among the museums. Whatever the destination, spring outings are synonymous with a smart casual look: an unlined cotton blazer and a linen shirt.

In this case, you can give free rein to creativity by choosing a pocket square in bright patterns and high contrast colours.

What to combine with a dark suit on the most elegant occasions, such as weddings or gala dinners? Whether you are the groom, the best man or a guest, the white linen or cotton pocket handkerchief cannot go wrong.

A classic of elegance, the secret of the charm of various 007s, as essential as perfect. If you want to dare a little, the alternative to total white can be a coloured micro fantasy.

A summer cocktail or a party on the terrace are the ideal opportunities to play with materials and combinations. A coloured or patterned clutch, in linen or silk twill, will give the right dose of light-heartedness to your linen or cotton blazer.

Once you have identified the context in which you want to wear your pocket square, you just have to study the ideal combination: match the pocket handkerchief based on the colours and fabrics you wear.

Choose the color of the pocket square

Generally, for example, a solid colour pocket square should always be combined with a structured tie with decorative motifs or vice versa.

What if you are not wearing a tie? In this case, the colour chosen for the pocket square can instead recall the colour of the shirt or the suit itself.

For example, if you wear a blue shirt or a blue suit, you can play with tone-on-tone colours by choosing a light blue pocket square. This is good advice even if the tie is present.

Finally, if you have doubts about what colour of pocket square you must wear, always prefer white: you will not go wrong since it is suitable for any jacket and for any occasion.

To each pocket square its own fabric

The same logic used for the choice of color combination applies to materials: complementarity.

A silk tie demands a pocket square made of linen or cotton, just as a silk scarf requires to be combined with a tie of less shiny fabric.

At work, use a cotton pocket square, as it is better to reserve the linen one for leisure and the silk one for ceremonies.

If you still have doubts and don’t know what pocket handkerchief to take, choose something simple: a white linen or cotton pocket square is a versatile and always an appropriate choice.

How to wear and fold a pocket square

Many men are afraid to wear accessories, fearing that they will not know how to use or combine them correctly.

Not entirely unmotivated fear, considering the extravagant and sometimes inappropriate combinations that populate the city.

The most important thing to remember to avoid these style drawbacks is the posture. Wearing an accessory with charm is a matter of nonchalance, everything must appear natural, but not casual.

To get a touch of refinement in more, its corners, once rolled up, should be sewn by hand.

Once you get the pocket handkerchief of the right size, all that remains is to learn the most common ways to fold it, remembering that the best adjustments are those that do not attract much attention.

Once you have chosen the fold, it is important to remember not to let the pocket handkerchief come out more than two or three centimetres from the pocket. Here are the most common folds.

Triangle fold (one corner up)

Folding at one point, also called corner up, it is one of the easiest ways to fold the clutch. It consists in folding the pocket square making only one corner protrude from the pocket.

Simple but not trivial, it adds a touch of greater accuracy to your outfit.

The two-pointed fold, also called two corners up, is very similar to the previous one but with two overlapping corners.

It is a perfect fold to reinforce the diagonal lines of the jacket and to accentuate the shape of the chest and the width of the shoulders. It can also be made with multiple points.

Long considered out of time, the square shape is perfectly combined with a bow tie or even without a tie.

It consists in folding the pocket square in a rectangular square shape, inserting it in the pocket and letting it come out only a few centimetres, parallel to the edge of the pocket.

Minimal and simple, the flat crease gives a touch of class to the style of your outfit.

Puffing, considering the softness of the shape, is the best way to wear a silk pocket square.

It consists of lifting the clutch by holding it in the centre and letting it fall downwards, then folding the lower part upwards, thus maintaining softness and volume, ready to be inserted into the jacket pocket.

A mix of creativity and light-heartedness.